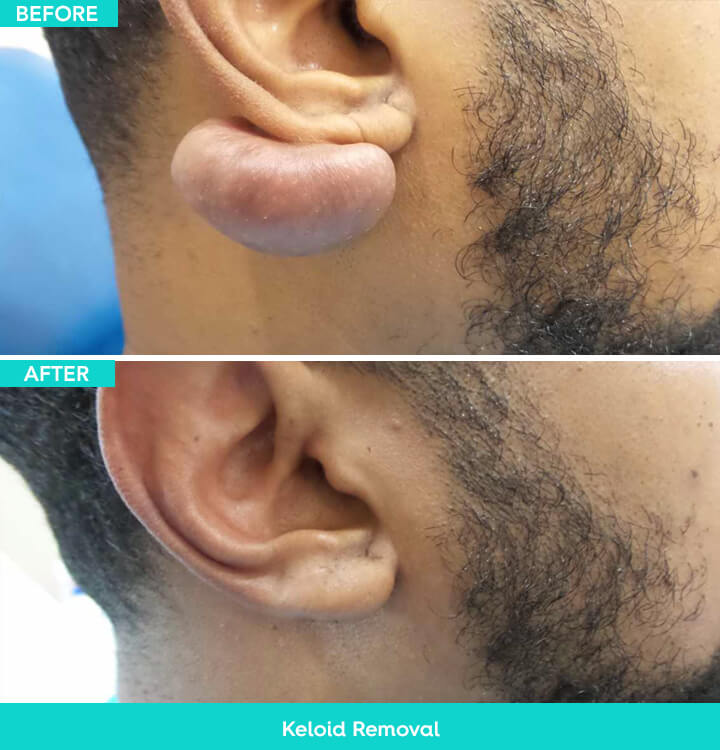 Keloids are a type of raised scar that occurs where the skin has healed after an injury. After your skin is injured there is an increase in skin cell growth forming a scar. In some cases, the scar tissue continues forming long after the wound heals. This extra scar tissue causes the raised area on your skin called a keloid. Anything that can cause a scar can cause a keloid, which includes cuts, wounds, acne, insect bites, injection sites, burns, tattoos, and piercings. Keloids sometimes show up 3 months or longer after your skin is initially injured, and some continue growing for years without intervention.

Here at Arviv Medical Aesthetics, we would love to schedule a consultation to determine the best and most efficient treatment for your keloid condition. One treatment option is to inject a steroid solution called Kenalog into the keloid lesion. After several steroid injections, the keloid usually becomes less noticeable and flattens in about three to six months. Keloids are notoriously difficult to treat and recurrences are commonly seen. Darker skin type individuals and those who have a family history of keloids tend to have a higher rate of recurrence after treatment. For severe cases, the keloid can be surgically excised. Postoperative radiotherapy can be regarded as an effective treatment method for the prevention of keloid recurrence after excision without serious adverse events. The radiation therapy helps prevent the increase of skin cell production leading to the overgrowth of scar tissue. This type of radiation therapy is for superficial treatment and will not go deep enough to affect internal organs. Oftentimes people who are a candidate for keloid excision will also likely need to follow up treatments with steroid injections to prevent a recurrence.

Leave a reply Click here to cancel the reply

Get to know your fillers!